Today I finished the final edits and formatting for my book Just Deal With It. The book is all about the town I live in, Las Vegas, from the casino dealer's point of view. Everyday when I go to my day job there are things I am sure to hear. From "Are you the cooler?" to "Winner winner, chicken dinner!" and of course "You're killin' me smalls", somethings are a given. I always like to share some of the experiences I have had doing one of the most fun jobs I have ever worked.

A few years ago I was joking around with another dealer as I walked out to my car after my shift. She asked if I ever thought about writing a book about the things I have seen while working in a casino. The truth at the time was that I had never considered doing so. I just enjoyed making people laugh with my random stories. I remember looking at her and rolling my eyes saying, "Oh yeah what a great idea! I could call it Just Deal With It and we could all have a good laugh at the inside joke." She turned to me after pushing the elevator button smiling.

She waited until we were almost to the top then asked when I would be publishing it. I laughed not realizing she meant it. It would be over a year before the idea would find any friction in my mind. While attending the San Diego State University Writers Conference I was again telling the tales of the casino to make people laugh. An agent overheard me and asked for an exclusive first read of the book I was pitching. What followed was an amusing twenty minute discussion about how he could possibly read something I was;t actually writing. He convinced me to think about it and gave me his card and a deadline, should I decide to follow through.

The next part was frustrating. Another dealer, whom I considered one of my best friends, has always had the dream of being published. I went to him to ask if he would consider co-authoring the book with me. He was ecstatic. We began working on ideas and layouts immediately but as time went on nothing came from his side. I missed the deadline waiting to see what wonderful stories he would include. After a year of pushing and getting nowhere I had to face reality, it was all on me.  That meant the book would be shorter than I originally planned but I was ok with that. I would still make it as fun as I could and share the stories I had always seen bring a smile to people's faces.

In the next few days I will be uploading the manuscript for publishing and the official release date is set for August 26th. It is the anniversary of the day I left my previous work for the casino I have called home for the past six years.  I cannot wait to introduce people to my world in a more meaningful and entertaining way. It was a journey to get here but well worth every step.
Posted by Author Musings at 6:37 PM No comments:

Last night as I was driving home from work I started thinking about why I am struggling so much when working on Fish, the book I will be releasing in October.  I know the main points of the story and the dialogue will flow as it should when I get to those points in the story. I have a playlist set up for the novel Sharing Strength and Fish is simply the novella prequel to Sharing Strength so everything seems to be in order. So why is it so damn hard?

For one thing, Rachel is not the main character in Sharing Strength. She is important. I would even go so far as to say her role in the book is vital to the story. However, she is not the main focus. The playlist is for overall mood and leaning more toward the main characters Kyle and Jasmine. Ok, understanding that I thought about Rachel and came up with several songs that work specifically for her. Now she has her own playlist. Things should be easier, but they aren't.

Rachel doesn't have the easiest time in Sharing Strength. Her trials and tribulations are emotional and at times painful. She is that character that tugs at my heart strings and knowing everything she deals with in the novel I wanted to give her some dignity in her novella. The problem is, the prequel is the book that explains how she became the person she is in Sharing Strength. I have to put her through even more to get her to the point she is at the beginning to the novel. I cry for her because of everything about her. Her age, just sixteen almost seventeen years old. She is struggling with her parents, her friends, even her teammates on the swim team have a tendency to make things difficult for her at different points. She has been sheltered and so when adversity arises she has no idea how to handle it.

She comes from a strict upbringing with the focus on religion. She is the epitome of a "goody two-shoes" and holds onto that even when rumors and bullying start to make her appear otherwise. Rachel is someone who fights to prove she is the person she says she is but every time she falls down it gets a little harder to get back up. She doesn't want to give up. She wants to heal from every time she has fallen, been kicked down or thrown, she is just having trouble finding that hand to help stand her up and dust her off when she needs it.

Fish is the second novella in the Sharing Strength series but because Survivor was based on a true story and only parts of Rachel's personality and experience come from a real person it is more difficult to write. I know she will step up and share the story if for no other reason than she wants to help, even if it is as a fictional character reaching out to a world beyond her own.
Posted by Author Musings at 2:33 PM No comments:

Last week I watched a webinar about book marketing. There were a few things I already knew but a few tweaks I could make to existing strategies which may improve visibility and sales. One thing mentioned repeatedly was newsletters. Using them, and doing so effectively, can be a major difference in your marketing effectiveness. I have chosen to look at newsletters from both sides, as a creator and as a subscriber.

I do have several I personally subscribe to that cover everything from cover art designs and writing programs to simply reading about what other authors are releasing or giveaways they are doing. It is a fantastic learning experience to see what authors similar to myself are doing along with ways I may be able to make those ideas more personal for my work. Because of this I have a huge influx of information everyday. I have fallen behind but for the sake of getting my writing career back on track I will be going through all of the emails this week, taking note of the newsletters I find value in and getting rid of ones doing nothing more than pushing products or services I don't see myself using.

The goal is to not only be caught up but using the information I gain each week as I go through the new emails. I want to find a way to connect with the information most useful for my writing then customize the marketing strategies and hopefully share my experience with other beginners like myself.

From a creator's point of view I am working to find what information to include, what is just filler, how to make it personal and fun, and of course how to track the effectiveness the letters. The webinar discussed ways to grow your subscriber list as well as how to include a pieces of information to help the reader know you and make it more personal for them at the same time. I have sent a few basic email newsletters but armed with this new information I am hoping to switch to a new service in the next month or so and begin to improve my reach so I may begin to see a growth in my writing as a business.

Part of that growth will come also from understanding the market so as I go through my current subscriptions I will begin deleting ones that not only hold no helpful information but will replace them with newsletters and blogs by authors in my genres and more closely related to my personal goals. As I continue to learn more I will be sharing the trials and triumphs here. Also if any of my readers have things they would like to see included or other authors have advice I would welcome any contributions to be considered.
Posted by Author Musings at 4:35 PM No comments:

Hey everyone, Bree here. Pumpkin is sleeping so I decided to take over and show my mini me, mom calls her Oreo, around a little bit. Things have been crazy here for the last month as mom tries to work during the night and then come home when the sun is coming up. She has been so tired it is difficult to get her to do anything, even give us extra treats. 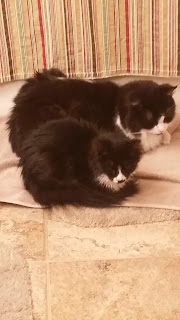 She cleans like she always does and eats like normal, sort of. But she also goes out to meetings she calls them and has been all excited about a new book. I hear her talking about it all the time. She keeps saying next month everything will happen. She has been talking about designs for something, I hope it's a new cat toy. I love it when mom gets excited but it would be better if she did it while snuggling me and giving me cheese.

Pumpkin likes to go up to mom's office when she is working and sleep on the computer so she probably knows more about what is going on than I do. I just thought it would be fun to send you all a message to say hello and I think something big is about to happen. Keep an eye out for details and I will jump on here again if I get the chance when I find out more.
Posted by Author Musings at 2:18 PM No comments: